Google’s John Mueller explains What is mobile Indexing and How to Ace it.

How does Google Mobile-first indexing work in 2020?

Google recently rolled out mobile-first indexing for all websites and also mentioned it was a big algorithm update where it would influence your rankings on google. What this really means is the google bots will first crawl the mobile version of the website and test/ verify if it works and renders properly. It will crawl all your links and code for the meta bit also the touch ports and rendering on the mobile screen. Once it passes this test, it will be considered in for indexing. Data and metrics from the mobile experience will have more dominance in the algorithm and user behavior, while ranking websites on google.

At the Webmaster talk, John Mueller shared a couple of key insights and how businesses need to adapt to Google’s mobile-first indexing. The foundation, simplified answer to what you need to do for Google mobile first indexing in 2020:

“With regards to the different versions on different pages, the thing to keep in mind is with mobile first indexing, we will be indexing the mobile version of the page.
So if the mobile version of your page does not use normal URLs for navigation, then we will have trouble indexing your mobile site because we won’t be able to access those non-URLs to get to your content.
So if the whole navigation on the mobile site is really purely JavaScript-based, you’re swapping out different layers on a page, it stays on the same URL, there are no actual links on this page, then we would probably have a lot of trouble being able to crawl and index that site.
And probably we would not shift that site to mobile first indexing at the moment. But at some point we’re going to make the decision and say well, we need to shift everyone over.
And that will mean we’ll shift your site over as well, even if it’s not ready yet for mobile first indexing.
And if really all of the content on your mobile site is not accessible through normal URLs, then we will drop that from the index.

So that content won’t be shown in the search results at all.

The solution, The approach to Google Mobile Indexing 2020:

“So it gets really complicated.
My recommendation for this kind of situation is to try to simplify things as much as possible for your website.
And instead of having three different variations of the same page, find a way that you can use some kind of responsive design so that you either just have two versions, maybe kind of like desktop/mobile combined and the AMP version.
Or maybe there is even a way to move to a pure AMP framework where you essentially use AMP for the whole website.
Because AMP is a responsive web framework, so you could theoretically do that for a lot of things as well.”

It makes complete sense. Google has always put the user first. If over  80% of the traffic is accounted by smartphones, the websites will need to load and function seamlessly on smartphones. I’m not saying desktop is dead – but think about it, why would Google rank a great desktop site that doesn’t render/open on mobile when the audience is on mobile devices.

Now throw in another core algorithm the google released recently, called BERT, that places a lot of importance on user intent coupled with the bounce rate/ drop off analytics data and you understand why mobile indexing is so very important.

What is extremely clear is that mobile-first index is going to be harsh for sites that do not adequately test the mobile versions of their websites or ensure that all their URLs get indexed and picked up by the Google bots.

You need to get the mobile site done correctly to ensure you rank on google now.

Finally, designers will have to stop designing desktop first sites and then adapting to half-decent mobile designs. And instead, start to actually design mobile-first sites.

If you need help with your business or brand or want to ensure you’re using best practices to rank on page of google or just need a website SEO site audit report , drop us an email and we’ll get back to you  🙂

As a Search Engine Optimization consultant and someone that’s obsessed with Data and the workings of google algorithm, I was testing the knowledge graph for the total number of new cases when the recommended searches pointed me to a random number. I decided to explore this and started adding random numbers to the search query with new cases. Each SERP had a Covid-19/ Corona Virus result with that many cases.

Q: What happens when you Type any 3 numbers + ‘new cases’ in google search?
A: You’ll see only articles that are Coronavirus-related articles. Really, we manually tested this with one hundred searches. 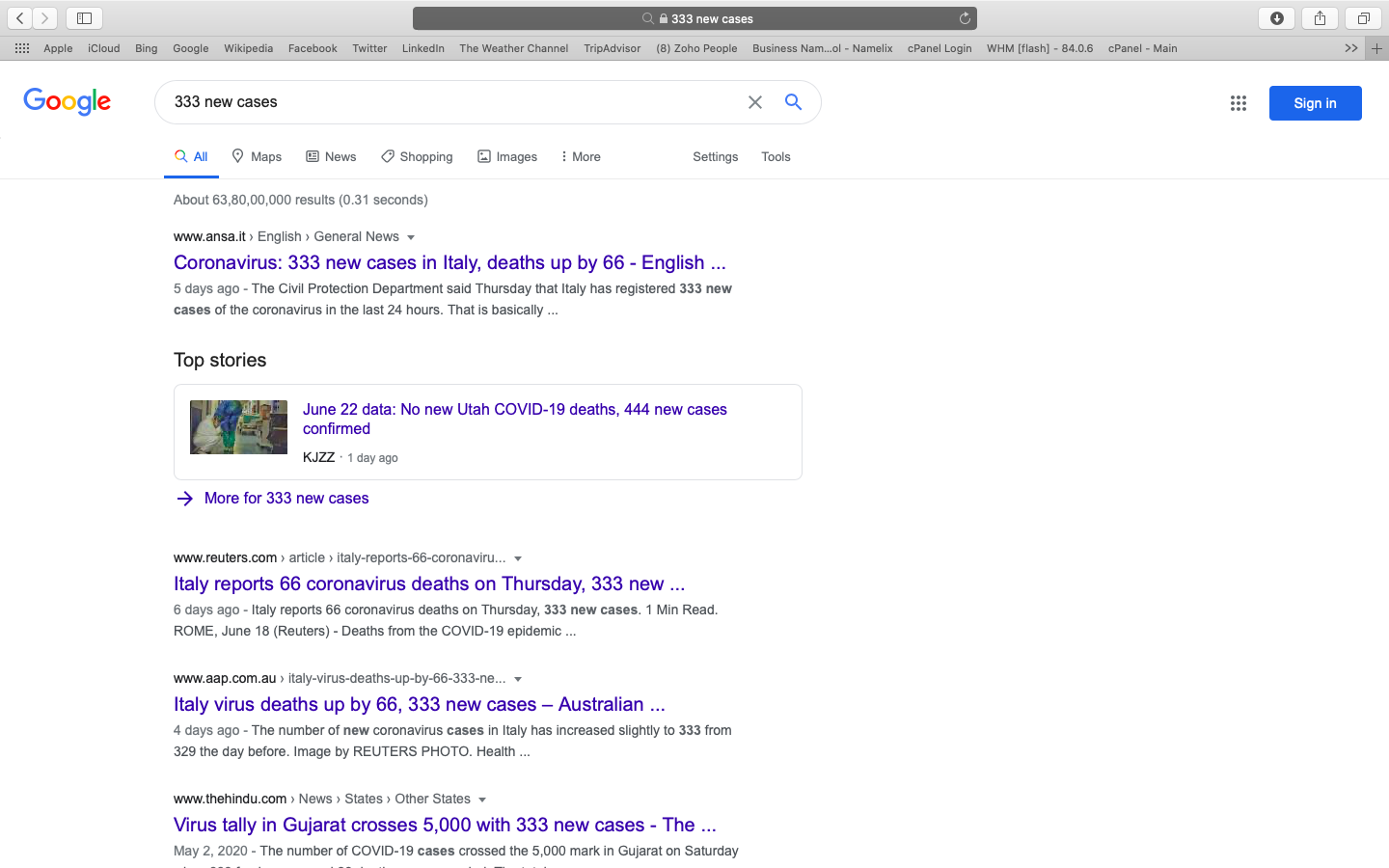 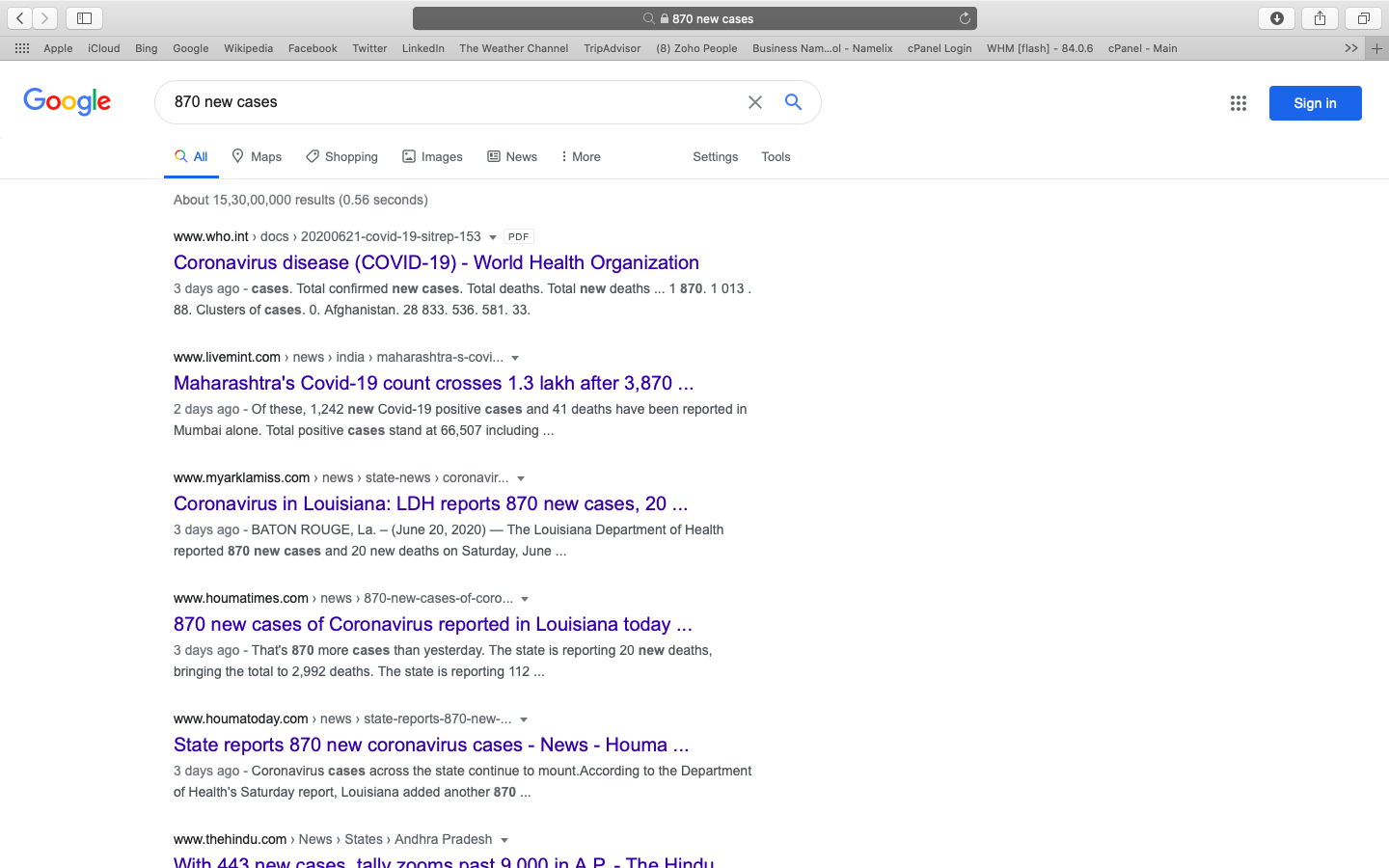 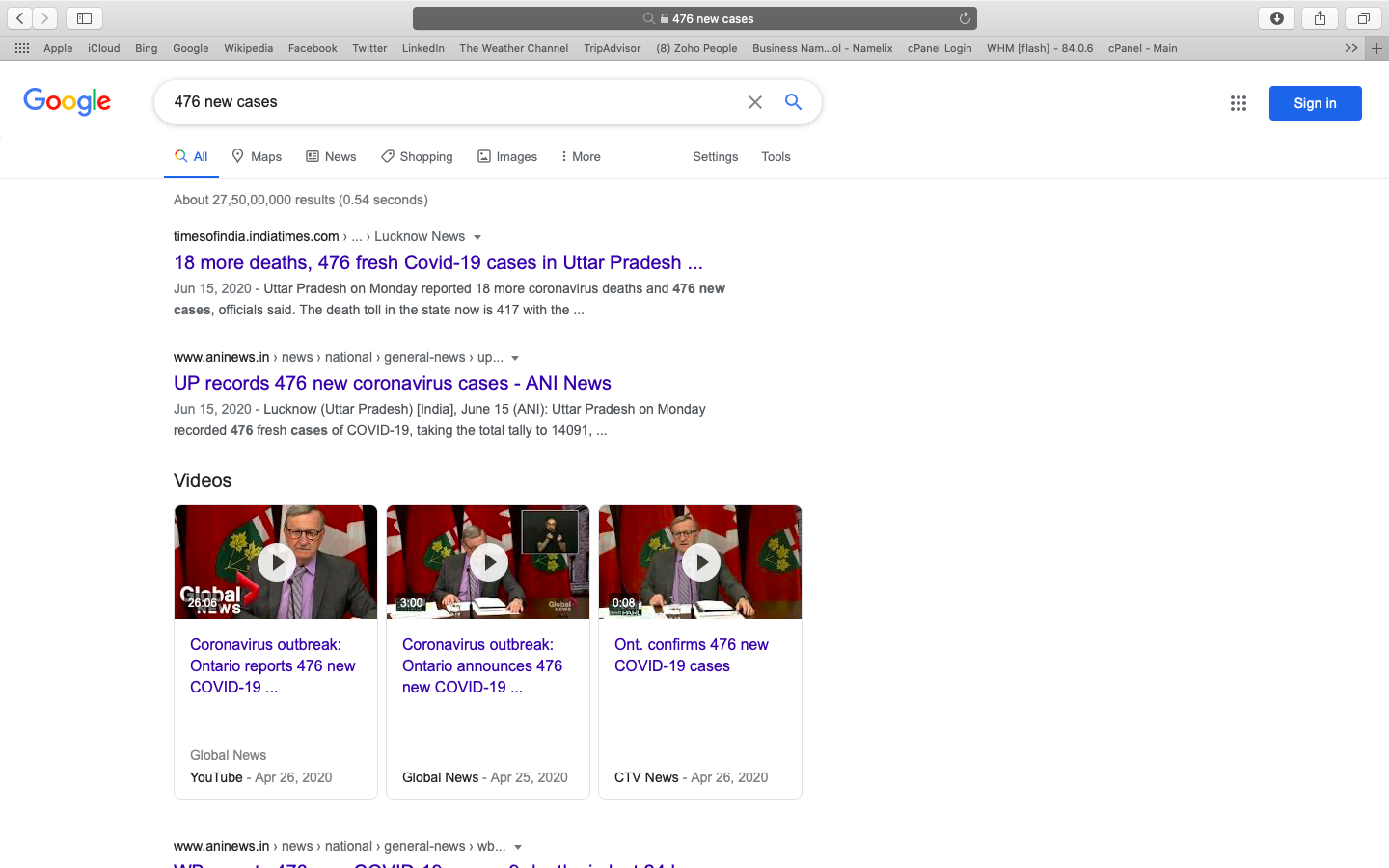 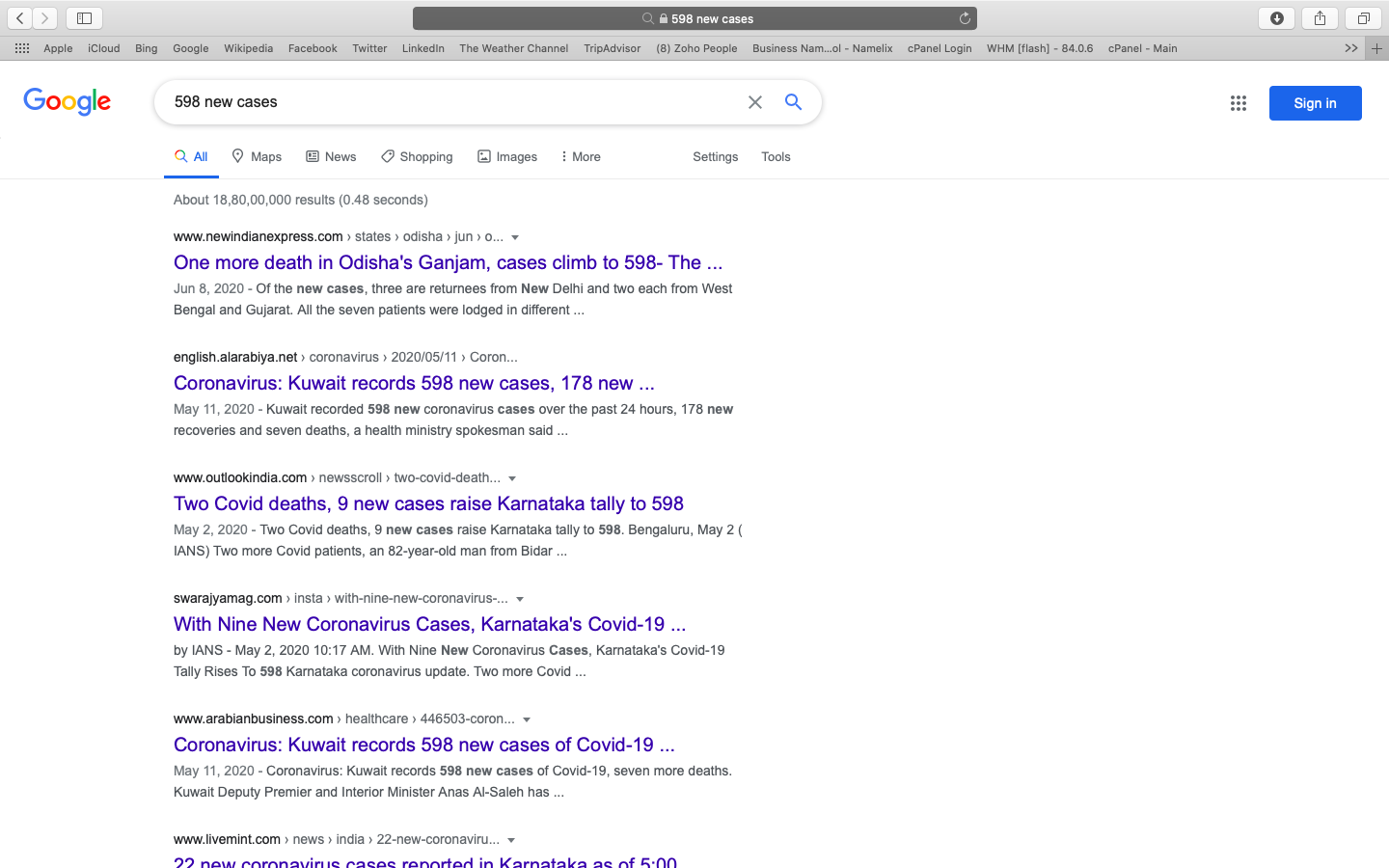 Q: What happens when you Type any 4 numbers + ‘new cases’ in google search?
A: You’ll again, only see articles that are Coronavirus-related articles. We manually tested this with a hundred searches. 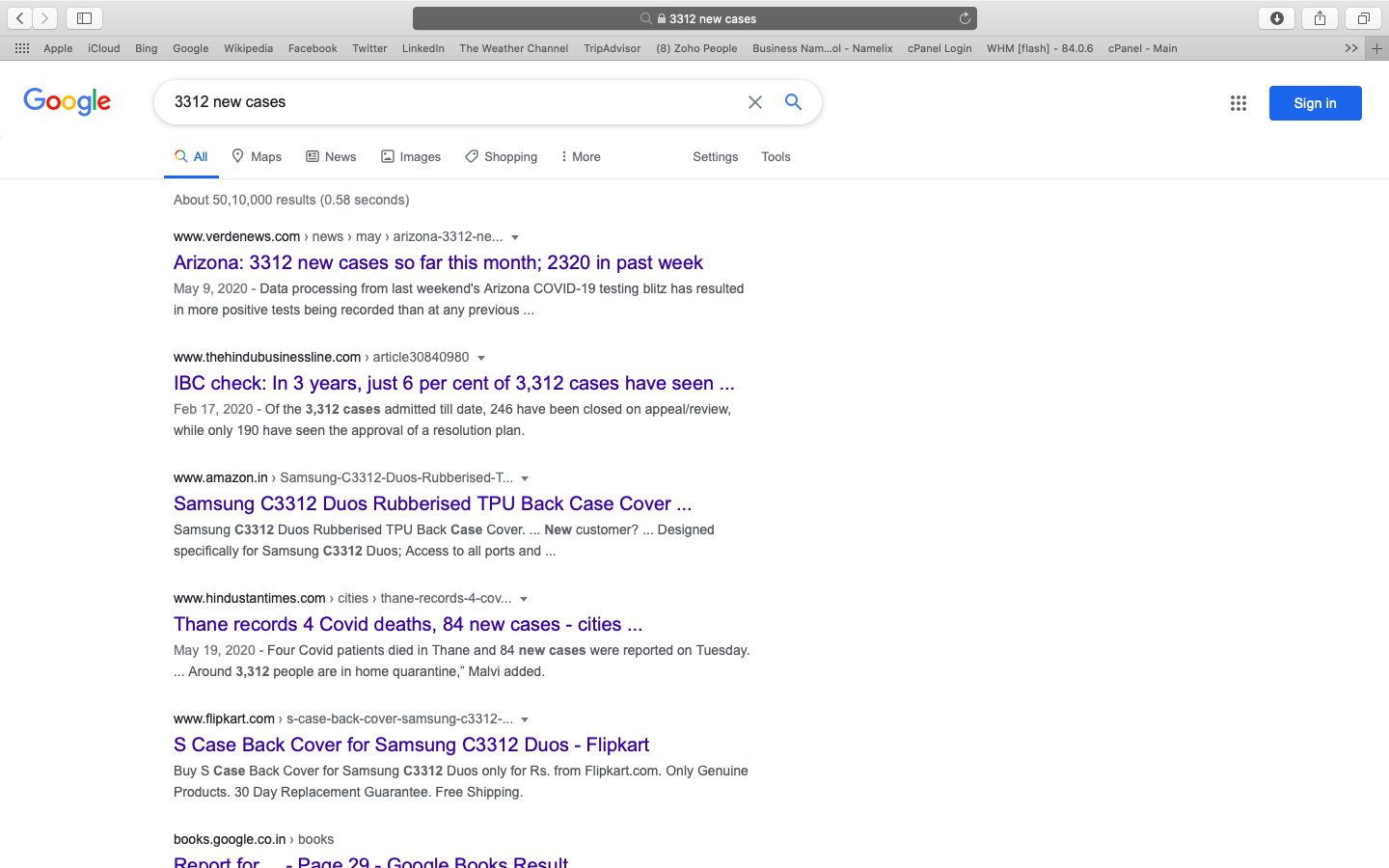 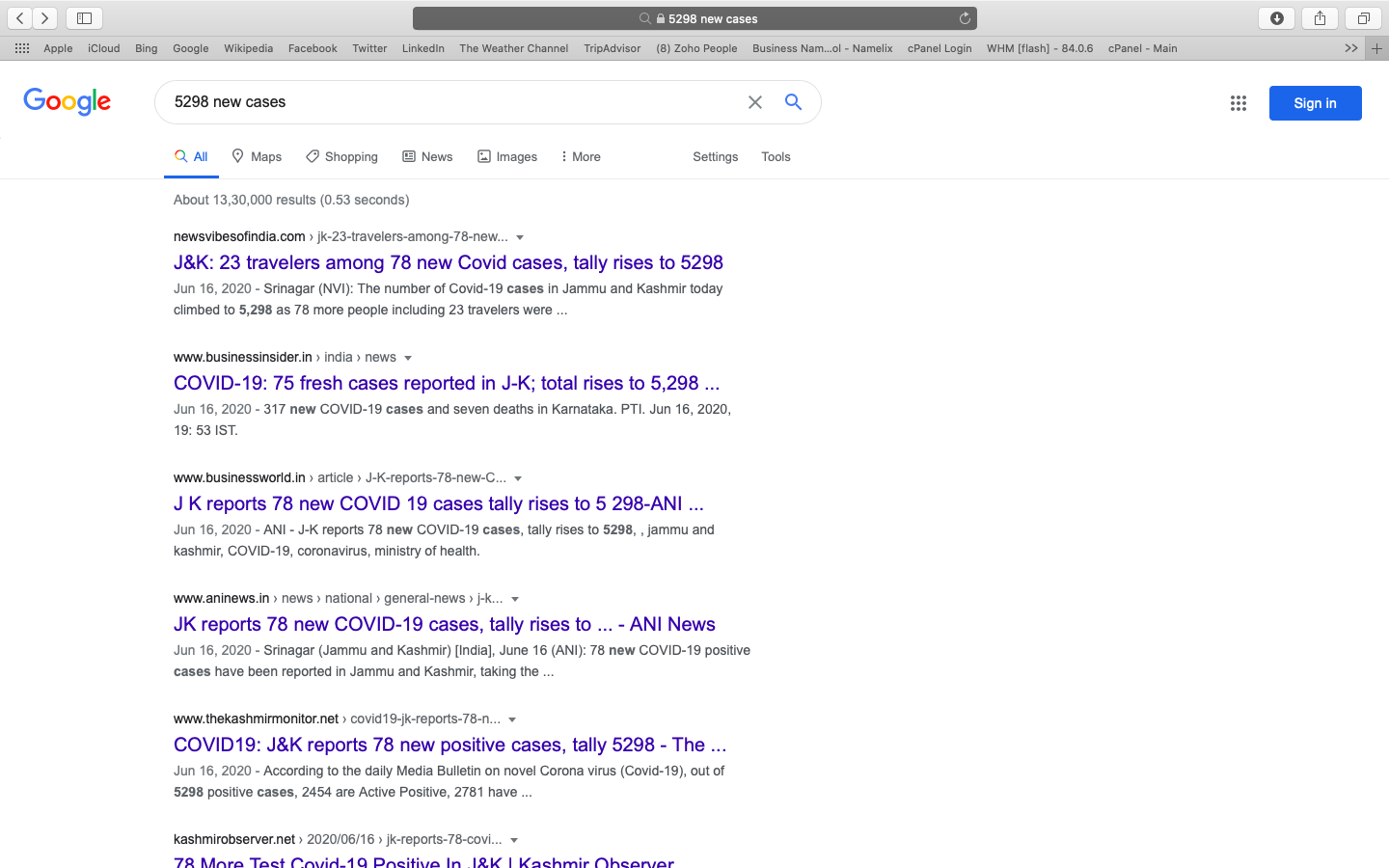 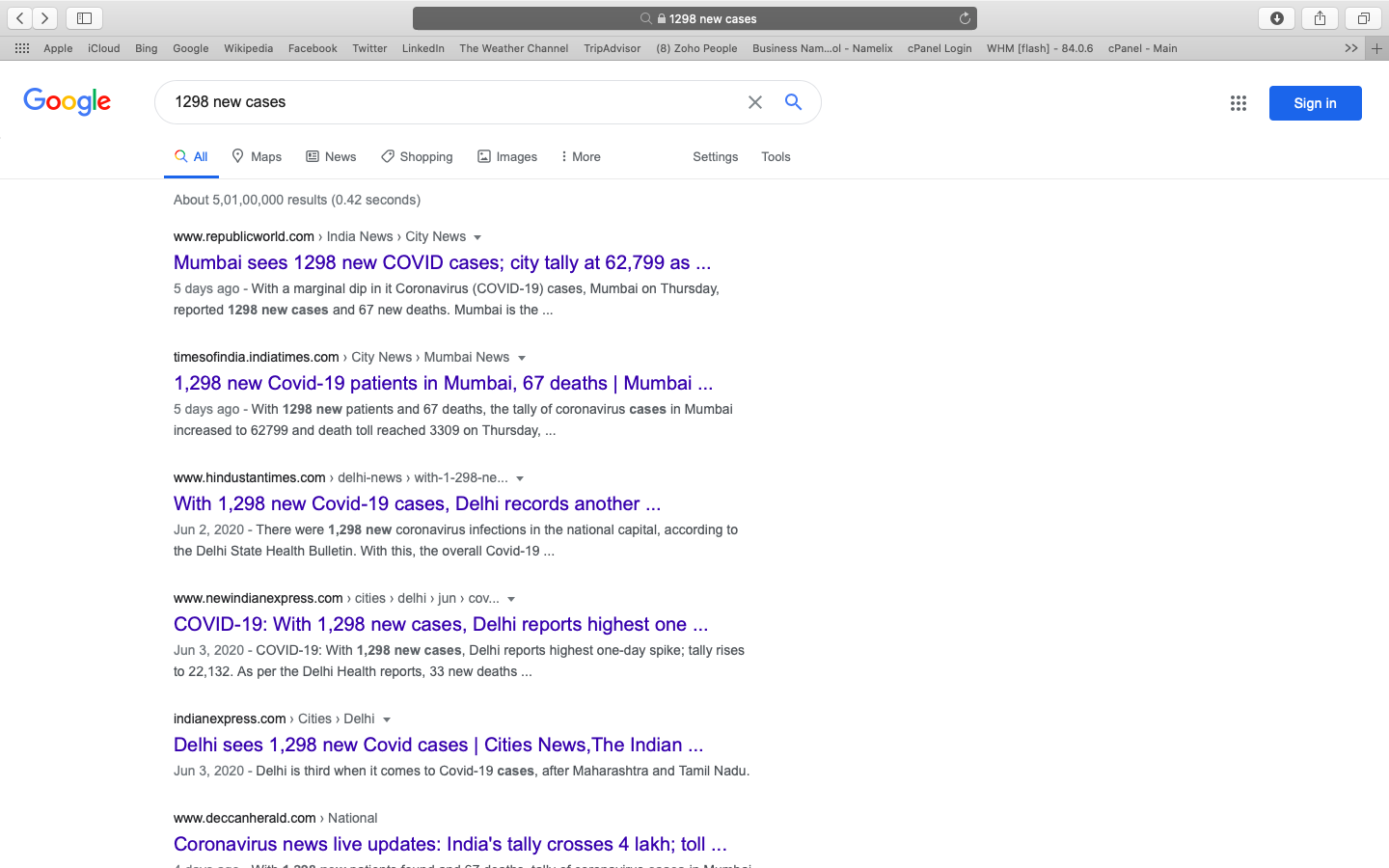 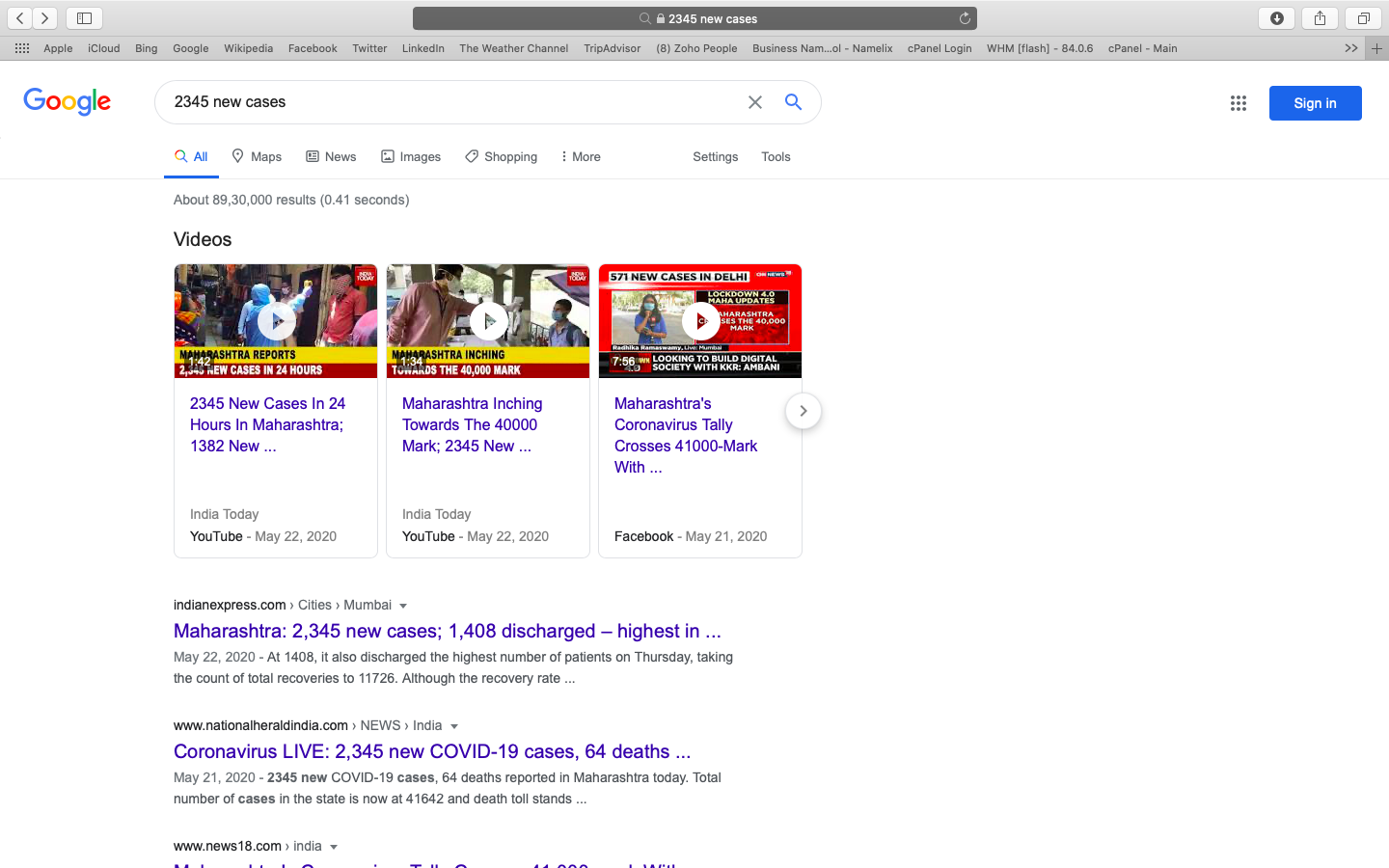 The accuracy for results is way higher for 3 digit numbers as compared to 4 digit numbers + new cases. Almost every 3 digital number + new cases search holds true to this result page. For 4 digit numbers, its at 80%. Whatever the variance, its really interesting that Google’s knowledge graph is doing this and there are news articles to support it – globally.

Conspiracy theory, Statistical accuracy, or detailed news reporting – we’ll leave up to you. Tell us what you think in the comments. 🙂